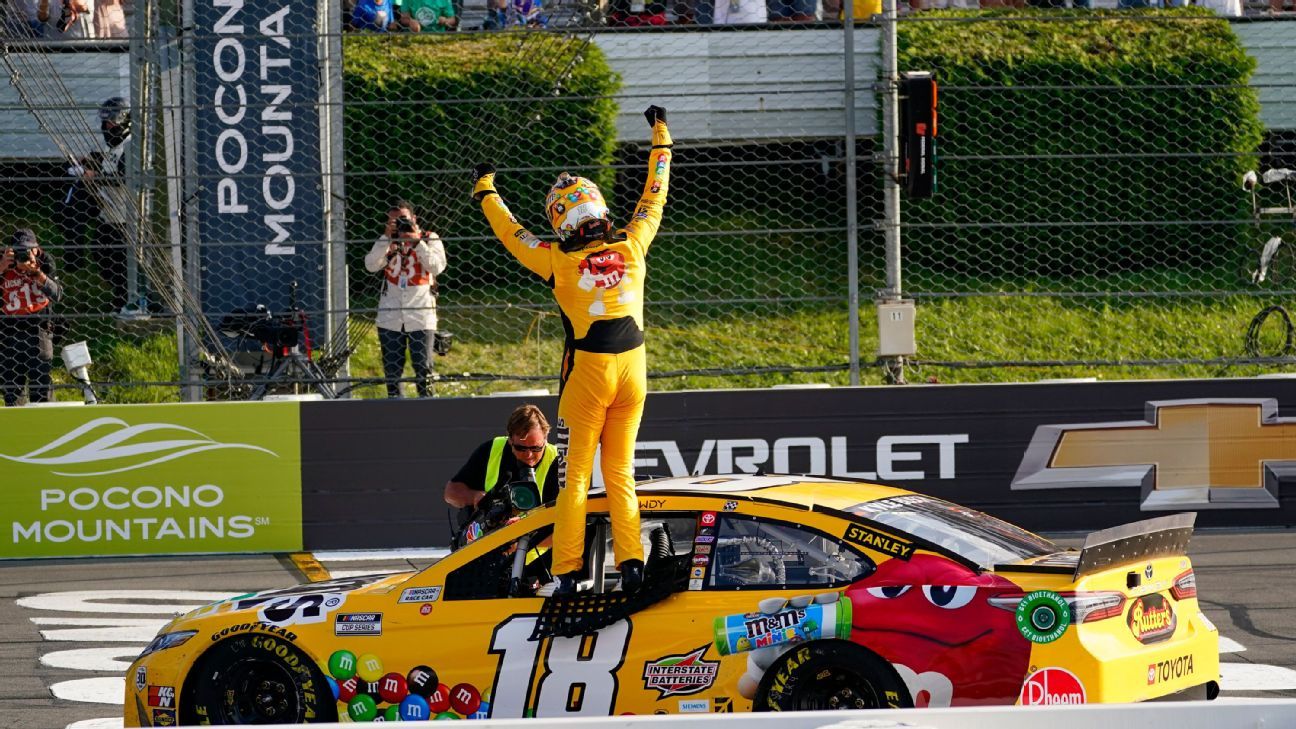 LONG POND, Pa. — Kyle Busch came through in the clutch. Even when he raced without one.

Busch busted Hendrick Motorsports’ winning streak and denied the organization a shot at NASCAR history when he raced to his second victory of the season Sunday at Pocono Raceway.

He needs to give credit to his tag-team partner. Busch, runner-up in Saturday’s Pocono race, led a few laps early until a leak in No. 18 Toyota’s transmission left the car stuck in fourth gear. Busch had a Joe Gibbs Racing crew member jump into his car and work on the shift stick.

“I’m going to need a push truck to get to Victory Lane because I have no clutch,” Busch said on the radio.

The 2 1/2-mile tri-oval wreaked havoc on fuel and William Byron and Denny Hamlin all saw their shot at the checkered flag disappear over the final five laps when they ran out of gas.

Kyle Larson, whose blown tire on the last lap cost him a win Saturday, was second for Hendrick Motorsports. Hendrick had won six straight Cup races, including Alex Bowman’s victory Saturday in the first race of Pocono’s doubleheader.

Hendrick was trying to become the first team since NASCAR’s modern era began in 1972 to win seven straight races.

Bowman started the streak in May at Dover and Chase Elliott followed the next week at Texas. Larson then ripped off three straight points victories at Charlotte, Sonoma and last week at Nashville – and squeezed in the $1 million All-Star race for four wins, total – all while Hendrick Motorsports became the winningest organization in NASCAR history.

Brad Keselowski was third, Kevin Harvick fourth and Bubba Wallace was fifth in his best finish of the season for Michael Jordan’s 23IX team.

Larson met with 40 students at the Urban Youth Racing School and he announced plans to race in the school’s go-kart race in August in Philadelphia.

The Philly-based program that creates opportunities in racing for minorities developed a deeper relationship with Larson after he was suspended last season for using a slur during an iRacing event. Larson often calls or Zooms with the students and bought the school racing simulators.

“Just having that relationship where they can pick up the phone and call me if they have questions about iRacing or something is pretty neat,” Larson said. “It’s a closer friendship, relationship with them. I think all of them look up to me and I think that’s great to be there for them whenever they need me.”

UYRS founder Anthony Martin said Larson and other NASCAR drivers will compete Aug. 7 in a go-kart grand prix near the school’s location in Philly.

“A lot of our students have never been to a race before, so to actually come see it up close, be a part of it, smell the gas, hear the sounds are very important,” Martin said. “Actually being here is a lot different than seeing it on television.”

NASCAR heads to Road America in rural Wisconsin, one of the new road course events on the 2021 schedule.